Tales of a distruptor in HR land.

Published: 2018-01-15
As the artic winds chill London to almost freezing conditions this week, so starts the never ending debate (or battle) on what setting we should set the office thermostat at. Even in our relatively small office of about 30 people, we seem to have people at either end of the spectrum on the ideal temperature scale and at every degree Celsius in between.

At one extreme, we have a girl who is sitting at her desk with her padded Canada Goose jacket on and a personal 3-bar electric fan heater sneakily plugged-in under the desk. At the other extreme we have a guy who is wearing a t-shirt and asks to have the window opened slightly complaining how stuffy the office is.

Mark Zuckerburg allegedly likes his offices to be slightly on the chilled side at 15 degrees. This, the Financial Times journalist Lucy Kellaway, suggests that this might be to stop “cyber-loafing”, ie “make people so uncomfortable that they have no option but to actually do their work”.

A study by Cornell University in the US has suggested that increasing the temperature by five degrees can cut out staff mistakes by almost 50 per cent.

But is there an optimal temperature that keeps most people happy? I can tell you that it is not the almost Swedish Sauna temperatures that our meeting room can get to if the heater is left on max for a couple of hours. Mr Stewart, from the Institute of Ergonomics and Human Factors points out that "if it’s too cold, people will complain but they’ll probably be working quite well. If it’s too hot, people will fall asleep and probably not do anything." 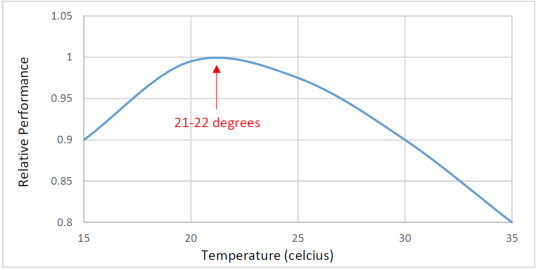 In conclusion, the data suggests an answer, but I am not sure this is going to be universally accepted in our office at least.